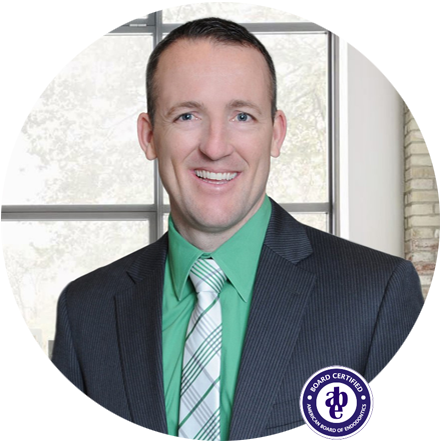 Dr. Peek is a board-certified endodontist with highly specialized training in root canal anatomy and microsurgical procedures. He was born in Oklahoma City, Oklahoma, and attended Heritage Hall School. He was a state champion in both football and baseball earning him a selection onto the 1999 Oklahoma All-State Football team. He attended SMU in Dallas, Texas, but then transferred and graduated from Wheaton College in Wheaton, Illinois.

Before entering dental school, Dr. Peek was a 7th grade science teacher and coach where he encouraged middle school kids to excel both on and off the field.

Dr. Peek graduated from the University of Oklahoma College of Dentistry. He then entered his endodontic residency at the LSU School of Dentistry where he received both his Endodontic Certificate and a Master of Science degree. He is an active and current member of the following organizations: American Board of Endodontics (ABE), American Association of Endodontics (AAE), American Dental Association (ADA), and Iowa Dental Association (IDA). Dr. Peek is also on staff at St. Luke’s Hospital where he can be called upon for consults in the emergency room.

Outside of dentistry, Dr. Peek likes cycling around the Eastern Iowa country side and playing golf. He enjoys life, his Crossfit community, and the ability to help others receive the dental care they deserve.

Dr. Peek has been an endodontic specialist for over 40 years attaining substantial knowledge and expertise in the field. He was born in Sioux City, Iowa. He attended college at Oklahoma State University where he was an all fraternity wrestling champion in 1971. He then attended the University of Iowa College of Dentistry where he was an exchange student in Sweden his senior year. Before graduating, he was accepted into the Endodontic program at Iowa and received his Endodontic Certificate and Master of Science degree.

Dr. Peek has lived and practiced Endodontics in Cedar Rapids, his adopted home town, since 2004.

Dr. Peek has served as the President of the IDA — Iowa Dental Association. As President he encouraged the improvement in the health of the public, promoted the art and science of dentistry, and represented the dental interests of dentists with the public they serve.

In his spare time, he loves to bike, play golf, and enjoy the outdoors with his wife, Judy, and their yellow lab, Moocher.

He cherishes working with his son every day, but is also proud of his daughter, Elizabeth Worsham MD, who is a psychiatrist in Houston, Texas.